Keep the detainees where they belong – at Gitmo

With just a little over 18 months left in his presidency, President Obama is pushing hard to fulfill his campaign promise to close the joint detention facility in Guantanamo Bay, Cuba. 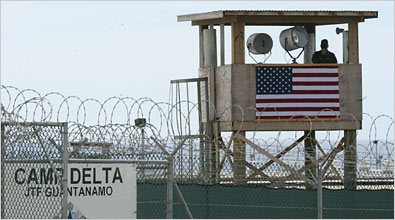 On Aug. 13, a Pentagon survey team, dispatched by Secretary Ash Carter, arrived at Fort Leavenworth to conduct an engineering and costs assessment of the Detention Barracks should the enemy combatants be illegally moved there by Executive Order.

This whole situation is convoluted on so many fronts, it makes my head spin. I will not get into the whole legal aspect of moving the detainees to U.S. soil as that is pretty much straight forward. However, Mr. Obama has given three reasons why he believes that the facility should be closed.

First of all, he believes that the facility, in and of itself, fuels individual jihadists and the jihadist movement around the world. Somehow, holding these terrorists irritates the enemy – go figure. From that reasoning, are we to surmise and ultimately believe that the mere relocating of the enemy combatants to a prison in the U.S. will then stop the jihadist movement currently under way around the world?

If that is the case, then I support Obama 100 percent.

Why didn’t someone else think of that many years ago? It is that simple. Just move the enemy, terrorists, killers, jihadists – whatever term you want to use – to Fort Leavenworth or the Naval Brig in South Carolina, throw away the key and the radicalized Muslim terrorists will throw down their arms and stop with this whole world domination idea.

Sounds good, or does it? Evidently, senators from around the country, including Kansas Sen. Pat Roberts and the Leavenworth County Commissioners, don’t think it is a good idea.

I agree with them and I don’t agree with the Obama reasoning. I don’t believe, for a minute, that al Qaeda, ISIS or any of the many associated affiliates and franchises are going to stop their war against America, western civilization and frankly anyone who disagrees with their distorted view of the world because we move detainees out of Gitmo.

It makes me wonder who Mr. Obama made that campaign pledge to in the first place.

Secondly, Mr. Obama believes that closing down Gitmo will close a “bad chapter” in American history and heal the scar left on America as a result of the supposed enhanced interrogation techniques reportedly used there in the past.

But the fact of the matter is that we have moved way past that “chapter.” Before Obama’s time, in December 2006, George W. Bush signed the Detainee Treatment Act of 2005, also known as the McCain Amendment, which basically required persons in DOD custody to not be subjected to any treatment or interrogation techniques not otherwise authorized or listed in the U.S. Army Field Manual on Intelligence Interrogation. Basically – no waterboarding or any other technique that would cause a “scar” on America. Furthermore, we, as a signer of the Geneva Conventions, have provided the protections under Article Four of the Third Convention – POW status – to the combatants (terrorists) and their associated organizations (al Qaeda, etc.) despite them not being defined as such and therefore not entitled to those POW protections in the first place.

That leaves one last rational reason that Mr. Obama provides for closing down JTF Gitmo which relates directly to expenses incurred per each POW. According to the last figure I read, it costs upwards of $2 million per inmate per year to house and secure the remaining 150 or so detainees. That is significant compared to an average of $70,000 to $80,000 per year per inmate at a place like the Super Max in Colorado.

I can agree with this rationale of decreasing federal costs of indefinitely detaining these individuals. I witnessed firsthand the expense of operating Gitmo as I worked there in 2008 and 2009. I saw up close and personal the different detention camps, the court facilities, the military housing and barracks, chow halls, PX, etc. It takes a lot of money to run the navy base at Guantanamo Bay but we have been running it since the 1950s, albeit, a major re-fueling base for Naval Caribbean and South American Operations. But since the base provides a military presence in that area of operations, why not keep it going and keep those detainees there?

Furthermore, if we close down Gitmo, does that mean we will not have other future enemy combatants from the continuing war on terror? Oh, but that leads into another convoluted issue better left for another day, i.e., the whole confusing issue of whether the U.S. is only involved in robust global counter-terrorism activities or if we are actually “at war” with these non-state actors and we need to adjust accordingly.

Viper One Six – Out.

Keep the detainees where they belong – at Gitmo