Operation Bulldog Bite – A Cop and a Hero

It was mid-November of 2010 in Kunar Province, Afghanistan and throughout Eastern Afghanistan the threat of the harsh winter was just weeks away. Kunar was one of 14 provinces encompassing the U.S. commanded Regional Command–East (RC-East) and it had the reputation of being a fierce strong hold for the Taliban Insurgency.  RC-East in general, and Kunar Province, specifically, was different from other parts of Afghanistan in that the terrain was far more formidable and unforgiving with its massive mountain ranges and deep valleys. Helicopters were used extensively not only for combat operations, but for re-supply of the U.S. bases scattered throughout the Province. Ground mobility on the narrow valley roads was extremely limited as the mountainous high ground was teeming with fighters secreted in the rocks and ledges above.

Kunar was also different from other parts of Afghanistan in terms of the enemy who lived and fought along the Pech and Kunar River Valleys. Not only were U.S. Forces trying to root out the Taliban, who were a cunning and formidable foe, but scores of Foreign Fighters from the Haqqani Network and other Pakistan Terrorist Organization to include al-Qaida were also amassed in and throughout the province which bordered Pakistan.

Task Force Bulldog, the 101st Airborne Division (Air Assault) from Fort Campbell, KY was the Battlespace Owner and the 1st Battalion, 327th Infantry Regiment, 1st Brigade Combat Team of the 101st was operating out of FOB Blessing located on the Pech River near the village of Nagalam. Recent intelligence indicated the presence of Taliban training camps operating along the Pech in the Watahpur Valley which demanded a clearing operation be conducted.

Operation Bulldog Bite was initiated and an Air Assault force totaling 150 warriors of the famed 101st Airborne, the 75th Rangers combined with elements of the Afghan National Army commenced a 4 day clearing operation to rid the area of these camps. In the dark of night U.S. Army Chinooks unloaded the assault force on the mountain peaks above the Watahpur Valley and the 150 soldier element was split into thirds as they searched and destroyed the identified training camps. 101st Soldiers moved during the darkness of night from one target to the next and Cobra Attack helicopters tamed the Insurgents during the clearing operations in the day. A four day running gun battle was endured as Insurgents forces, secreted in the cliffs and ridges above, rained heavy fire down on the soldiers. 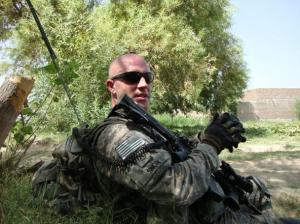 Among those brave soldiers executing Bulldog Bite that second week of November 2010 was a young 25 year old U.S. Army Specialist from Fairborn, Ohio by the name of Jessie A. Snow. Specialist Snow was a member of Abu Company, 1st Battalion and based out of FOB Blessing. Bulldog Bite was not Snow’s first mission as he had already participated in over 18 air assault mission and three major operations and had earned his due in this unforgiving piece of ground in eastern Afghanistan.

Combat is many things and sometimes in the midst of all the chaos there are moments where some of the most unsuspecting people find one another and connect in unforeseen ways. You see, during this mission a 46 year old retired police officer of the Santa Ana, CA Police Department by the name of Karl Beilby was embedded with the 101st. His mission, like many of the LEPs embedded in OEF and OIF, was to bring to the counterinsurgency fight his unique knowledge and investigative police skills.

Over the course of the 4 day mission, LEP Beilby and Specialist Snow met one another as they traversed through the Watahpur Valley with their fellow warriors. Snow, as it turns out, was very interested in law enforcement and sought out LEP Beilby to get an old cop’s take on pursuing a career as a police officer after his time in the Army was over. During breaks in between marching, eating, cat naps, and fighting, Beilby told Snow stories of his law enforcement career while in Southern California. This was intriguing to Snow and over what amounted to only a few days spent together in the remote Hindu Kush Mountains of eastern Afghanistan, Specialist Snow and LEP Beilby became the unlikeliest of friends with Snow referring to Beilby as “sir” and Beilby referring to Snow as “kid.” 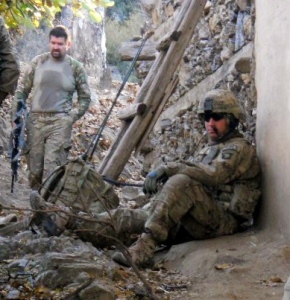 Fighting continued for three days up and down the valley and losses were mounting and the number of walking wounded increased. Onto the fourth day, November 14, 2010, the soldiers sought higher ground in order to seek refuge and out maneuver the enemy. On an outcrop near a steep mountain peak, Specialist Snow, LEP Beilby and a handful of other soldiers set up a perimeter and took a few minutes of down time as they believed they were in a good defensible position.  At approximately 1500 hours, as LEP Beilby was seated leaning against a 12 inch wide tree and Specialist Snow was in a position nearby, all hell broke loose when an RPG impacted 30 feet below their position and machine gun fire riddled the ground all around them. Specialist Snow, Beilby, and the others returned fire in all directions. LEP Beilby left his cover behind the small tree and crawled to a nearby soldier who was hit in the shoulder by gunfire. As Beilby was attempting to get a dressing out of his med kit, he too was struck as a bullet entered his lower back, went through his intestines, shattered his left hip, and exited his stomach.

Seeing Beilby and the other wounded soldier, Specialist Snow, who disregarded his own personal safety and exposed himself to incredible direct enemy fire, made his way to both men and covered both of their bodies with his own. While shielding Beilby from incoming fire, he began to stuff Beilby’s wounds with dressings until a fatal round struck him in the head.

Beilby felt Snow’s body go limp and at that moment knew that the young warrior, a kid in Beilby’s eyes, had done the unthinkable, sacrificed his young life for his own.

Beilby, under fire himself was able to pull both Specialist Snow and the other soldier to safety in a nearby small ditch where other soldiers were also laying. For more than three more hours, until after sunset, the fighting continued until Blackhawks appeared overhead and U.S. Airforce Pararescue Jumpers (PJs) from the 176th Wing of the Alaska Air National Guard descended and hoisted the over 30 WIAs  and 6 KIAs to safety.

In combat, many things are turned upside down and during Operation Bulldog Bite in November 2010, a 46 year old retired police officer from Southern California who was embedded with the 101st Airborne as a LEP/would be soldier was befriended by a 25 year old full-time soldier who wanted to be a cop and who paid the ultimate sacrifice so that Beilby could live.

LEP Karl Beilby eventually recovered from his physical wounds but not a day goes by that he does not think about the kid, the warrior, and the hero, known to him as Jessie. 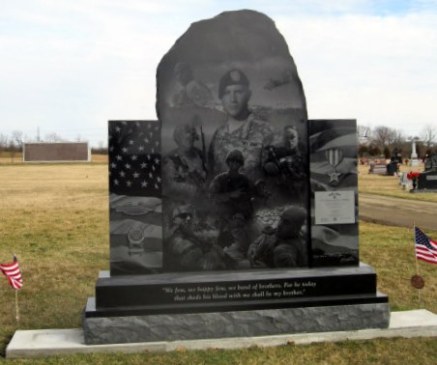 I offer this story as a salute to all of our Troops and Warriors who have given their all and paid the ultimate sacrifice so that we can live in freedom and during this month of May when we pay tribute to and honor those police officers across our great nation who, like Officer Karl Beilby, quietly serve their communities and the nation they love never seeking recognition or fame while risking their lives each and every day.

May God bless them all.

4 Responses to Operation Bulldog Bite – A Cop and a Hero